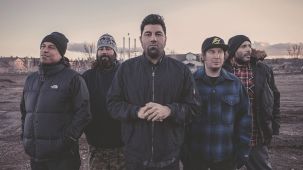 In which Eric McClanahan lists his 5 favorite Deftones tracks up to this point in their career.

The theme of my five favorite Deftones tracks is most certainly soaring choruses, and to me there’s not a better one in the discography than this. Add the killer drum beat, relatively unique guitar tone, and overall sexy R&B vibe and there’s really not a strong challenger to this song for that number 1 spot.

Anyone who knows my taste in music knows that I’m a sucker for a space-y, atmospheric vibe and this song definitely has it. I rarely listen to Saturday Night Wrist anymore, but this song is rarely skipped when it pops up on my “top-rated songs” playlist.

You finally get one of those heavy, gritty Deftones riffs on this list, but instead of vocalist Chino Moreno doing one of his hip-hop/scat influenced vocal stylings a la “Hexagram” and “Street Carp”, he launches into another one of those beautiful, soaring chorus melodies.

How was this not the biggest hit in the Deftones career? That chorus can hold up on pop radio and the riff should have been spun to death on active rock radio. And then he even gives a little bit of that hip-hop/scat deal before the second verse. Now that I think about it, this might be the most all-encompassing Deftones track in existence.

Despite the fact that Saturday Night Wrist has two tracks in my top 5, White Pony is still the bands best album by a fair amount. I just hope that one day they’ll release an album where they B-side tracks like “Rapture” and “Rats! Rats! Rats!”, and feature nothing but spacey jams like “Hole in the Earth”, “Xerces”, and “Cherry Waves”.

“Change (In The House of Flies)”

“Be Quiet and Drive (Far Away)”